The Duality & Unity of being T

You’ve shown us who you are, EX-Gov. Sanford, we don’t need another demonstration 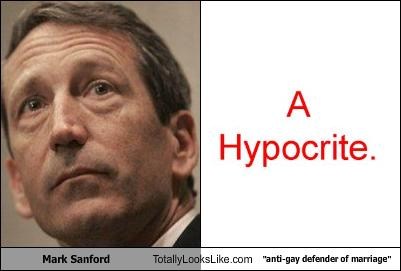 Politically, TBGL people vary in their beliefs just as any other groups. Even so, can’t deny I was a little shocked to know of Trans people that were republicans, but as a wise woman once told me, it takes many people to make the world go round. Many in the tblg advocacy group maybe a little weary of expressing their political affiliation out of fear of excluding any future supporters. While I can support some ‘sane’ fiscal responsibility in government, am an unashamed, flaming, and left-wing liberal on social issues. If a person shows you who you are, believe them. As Governor of South Carolina Mark Sanford was proud to be and show how anti-TBGL he was, so why are we expecting a different demonstration?
November 2002 Mark Sanford, then Governor not only was in favor of restricting marriage to a union only between a man and a woman but he also opposed civil unions. He also opposed continuing affirmative action in colleges and university admissions and voting yes on banning gay adoptions. He was and still is so anti-tbgl that he also voted in favor of the Defense of Marriage Act, that would have made amends in the Federal judicial code to provide that no state, territory or possession of the United States or Indian tribe shall be required to give effect to any marriage between person of the same sex under the laws of any other such jurisdiction or to any right or claim arising from such relationship. 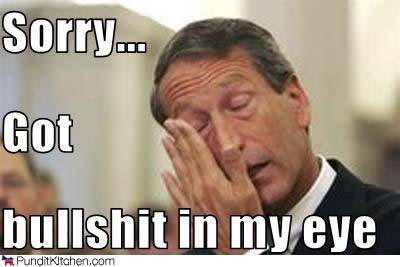 The former Governor who ran and was celebrated for promoting family values has been known to say, that he believes that gay marriage is wrong because he believes, based on what the bible says, that homosexuality is a sin and believes it is a choice gay and lesbians make and not something someone is born with. This from a man that not only embarrassed and caused the people of South Carolina wasted tax dollars looking for him in the Appalachian Trails but as Nicholas F. Benton wrote in a June 2009 article in the Falls Church New- Press, "The utter hypocrisy of right-wing Republicans who’ve done everything in their power to disenfranchise and deny marital and other rights to lesbians and gays jumped out of the headlines again yesterday when South Carolina’s Republican Gov. Mark Sanford was caught having an extra-marital affair, and was forced to confess.” Mr. Benton ends poetically with, "’Defense of marriage’ my foot!” The Australian quoted Sanford as saying, "The bottom line is this--I have been unfaithful to my wife."

Now as a candidate for the first congressional district, Sanford wants his old job as a representative again. Giving him the power to propose and vote on bills like, you guessed it, marriage equality and affirmative action legislation. He’s asking for our forgiveness and understanding, not an impossible task actually if you’re a minority, that is, those of use that want to be judged by our character and not by the color of our skin or whom we choose to love. Then again, character, is the issue with Mark Sanford; he’s proven to us with anti anyone else that’s not like him legislation, infidelity, abuse of an elected office, misuse of tax payer funds and earning the public’s mistrust. My question is, though we can forgive someone of being human, are we going to give them the power, again, to deny us the respect we deserve as human beings? Capable of legally loving whom we choose, be given a fair chance in the work place and in college admissions. 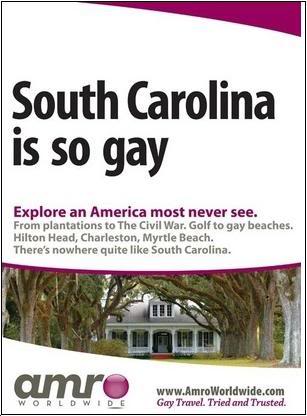 If you’re still not convinced Mark Sanford is no friend of the TBGL community. In fact he’d be more accurately labeled our prime enemy, try remembering London England, 2008. A year before the Governor, internationally, embarrassed the state and his family, he learned that South Carolina was being advertised as a gay tourist destination and ordered a Cabinet-level department he “to do the right thing personnel-wise or process-wise to ensure this does not happen again,” Sanford’s spokesman Joel Sawyer told Q-notes. It was in reaction to U.S. media reports of the time, that a subway poster mounted in London, England, during Gay Pride week was announcing, “South Carolina is so gay.” The state employee who approved the ads was forced to resign. Similar ads were posted in Atlanta, Boston, and Vegas; they were labeled “inappropriate”, by then Governor Sanford. The advertisement received such negative reaction from Sanford and other state leaders that the fallout from the TBGL tourism is possibly still being felt. According to an Huffington Post article, Warren Redman-Gress, executive director of the South Carolina Alliance for Full Acceptance, a gay and lesbian advocacy group said, “I get calls regularly, people who want to know before I come and spend my hard-earned money, my souvenir dollars in South Carolina, is it a place where it is OK for me to be gay?” Whatever business you have that caters to the TBGL community may still be affected by those negative reactions from Sanford. Also imagine how many young, bullied TBGL people may no longer be a resident of this state or chose not to move here with such public anti-TBGL attitudes coming from the head of our state. Is this, in 2013, the impression we want the community worldwide to view SC?

The reaction to Sanford then, caused the SC Pride Movement, to honor him with a “so gay” award for his blatant discrimination against the Gay, Lesbian, Bisexual and Transgender community of South Carolina and those tourists who are now less likely to visit SC because of his comments, your homophobia is “So Gay’! 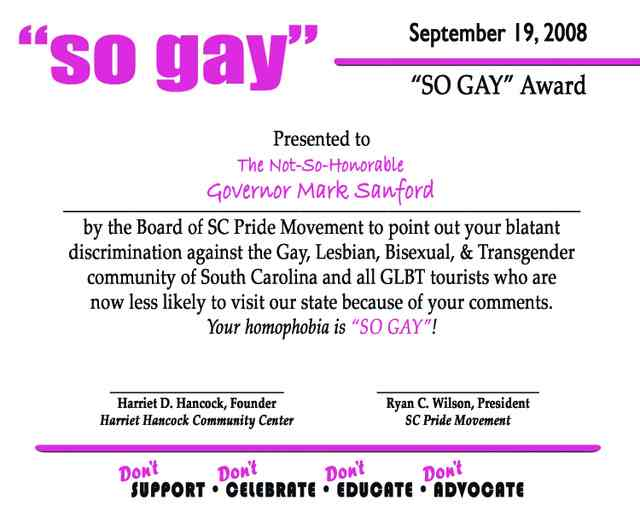 Truly, Mark Sanford has shown us who he is and we need not to ask him to give us further demonstrations of his hate filled legislation. In 2013 our eyes should be moving forward, not backwards, to marriage equality for all and an end to discrimination in the workplace due to gender. Can we afford a return of a cheat, a liar and a bigot, whom before his 2009 scandal was even considered as a possible running mate to then Presidential Candidate McCain? We, as SC TBGL voters (those who voted for him and those that didn’t vote at all), would have been greatly responsible for placing a man, one step away from being President of the United States that stood against us and against a true united, United States. Today, we are faced with that same option because Mark Sanford wants to restart his political career at his initial point prior to his own downfall, as Congressman Sanford. Don’t think for a second he’ll stop there and don’t lie to yourselves that he has changed. Scorned and embarrassed by his own infidelity, he’ll be now more than ever and maybe even super charged, to pacify those that would preach to US, about family Values. Your goal, if you want any respect as a human being and not as a letter in the TBGL alphabet; stop Mark Sanford now and tell him to go back to Argentina, we will not cry for him.
Back

The list of tags is empty.
Webnode, an innovative sitebuilder
Have a captivating website for free!
Get started